As always, please read through the changelog before updating with pihole -up.

More details for your adlists 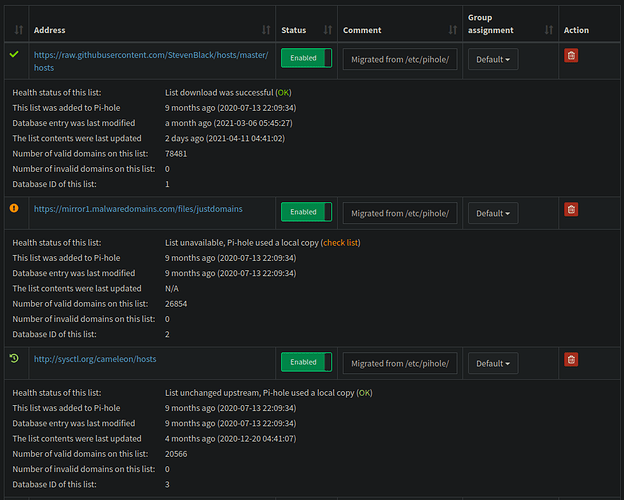 This PR adds a third default theme, an even `darker` variant of the dark one. It also fixes an issues with the existing `dark` theme where links in box headers (like the Query Log’s “show all”) were completely invisible.

Comparison between the existing dark (on the left) and the new darker (on the right):

Until now, FTL’s IP and IP-NODATA-AAAA blocking modes sourced the IP to deliver on a blocked domain from the setupVars.conf values IPV4_ADDRESS and IPV6_ADDRESS. This is, however, quite a limitation, especially if the device running Pi-hole has more than one interface or of the address is changing. To address this, FTL v5.8 implements an automated IP blocking mode. Instead of reading the addresses from setupVars.conf, we dynamically determine the address of the interface a query arrived on. We then use this IP address in the blocked reply. This does not only reduce maintenance (IPV4_ADDRESS and IPV6_ADDRESS can now be removed from setupVars.conf) but also localizes blocked queries. The automated detection can be overwritten using REPLY_ADDR4 and REPLY_ADDR6 in pihole-FTL.conf.

New features, bug fixes and several other tweaks are contained in this release. Check out the change log below for more information.

The settings page still relies on those values; without them it just displays unknown:

pihole -d will also still check if the interface's addresses match the values in setupVars.conf.

Thanks for checking. Something we will need to keep in mind for the work on the development-v6 branch

Greetings-
I just updated and I don't see the new adlist feature. Am I looking in the wrong place or do I need to activate something?

click on the icon before the url to expand 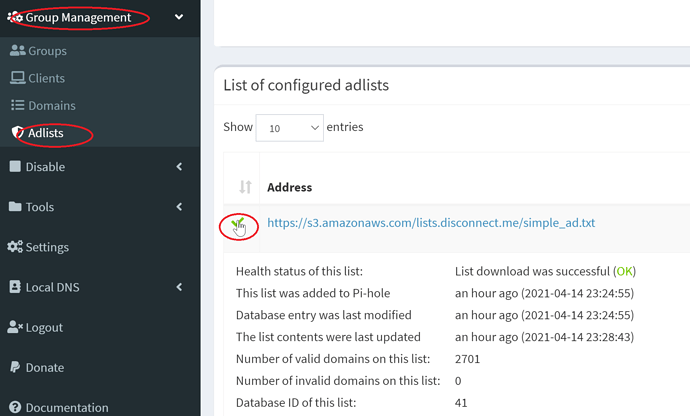 6 posts were split to a new topic: PHP-8 packages not found

Updating my docker container to the latest release didn't work for me, Pi-hole wouldn't resolve any DNS requests and had this in the logs:

[✗] DNS service is NOT listening

Rolling back to the 5.7 docker image worked fine. The last two releases have both had non-working docker images on release requiring me to roll back.

Anyone else using docker? Did it work for you?

I've updated to the latest docker image without issue. Perhaps your specific configuration has some interesting settings?

Brought up the docker container on a two different PCs (one running Debian and the other Ubuntu) with no pre-existing configuration at all and a very simple docker-compose.yml file and get the same error:

Do the exact same thing using 5.7 and it starts up fine:

I stand corrected -- my docker logs pihole shows the same failure message that yours does.. but in my case, pihole is actually responding to DNS queries. So the logs indicate failure, but pihole is listening for DNS requests.

OK I think I've gotten to the bottom of it. It's a race condition. Here's what startup looks like:

According to the FTL src, "pihole-FTL test" performs a full startup, and then immediately exits. This is to confirm that the configs are valid. Then the s6 20-start.sh continues:

Perhaps in pihole <= 5.7, pihole-FTL test would fork and remain running (and listening on :53) long enough for gravity.sh to complete, so it got a clean pihole status at the end. but now, the FTL test process is gone by the time gravity's status check looks for a listener on port 53. Hence the error output.

This prints the kill usage because pgrep didn't find a pihole-FTL process. More evidence that this startup script expected pihole-FTL test to still be running by the time we got here.

Thanks for digging into this.. please join us in the discussion on Github:

This is a: Bug Details In an attempt to vet the PR you merged for me earlier today, I pulled in the latest...

If you have deleted or commented out the IP addresses in the setupvars, pihole -g returns the following error message:
"No IP addresses found! Please run 'pihole -r' to reconfigure".

Managed to get pi-hole running. It was failing to resolve DNS requests and was hanging on startup at the 'DNS service is NOT listening' message but by doing the following I have managed to get it running, although it still reports that message in the logs it does actually run. Steps taken:

EDIT: Actually ignore that. It worked briefly until a reboot and then it's stopped working again and hangs on startup. Back to v5.7 for me.

Thanks for the report. The comment about the possibility to remove the variables from setupVars.conf was (initially) meant to be an internal one and it seems we forgot a few spots. Proposed fix:

After a bit of digging around I've got v5.8 running in Docker. It still shows the error message in the logs on startup, but it does actually run and resolve DNS requests. There's a bit of detail required here, but it's something that could easily affect other people so it's worth going over.

My network has a gateway that hands out IP addresses, DNS settings etc via DHCP (pretty standard) so this is the DNS server for my network and it forwards on requests to Pi-hole.

I have a small low power PC that runs Pi-hole in a docker container. This got it's address from a static reservation in the DHCP server. So at this point you have the scenario where the Pi-hole system is using the DHCP assigned DNS servers which are in turn itself.

During startup of the docker container it is trying to do some queries to the internet (looking for newer versions etc) which cannot work because there is no DNS server running because Pi-hole is not running. This in turn stops the docker container from starting up (or at the very least stall for a very long time).

BUT - this setup worked fine prior to the release of v5.8, so I think the comment about the startup changing and previously 'pihole-ftl test' being left running is true and this was allowing the startup to run previously.

It can be argued that I should have used a static IP on the server before, but controlling IPs through a single place on the gateway with reservations is much simpler to manage and it did work previously.

Either the docker container should avoid doing queries to the internet on startup before it is able to serve DNS requests or this situation should be documented so people can avoid it.

I did the upgrade, and am not using docker, but several hours after the upgrade my setup went to "DNS service is NOT listening". I was able to get this "fixed" temporarily by changing my DNS settings and saving, but I have noticed lots of database failure messages in the FTL log, for example here:

There's a bit of detail required here, but it's something that could easily affect other people so it's worth going over.