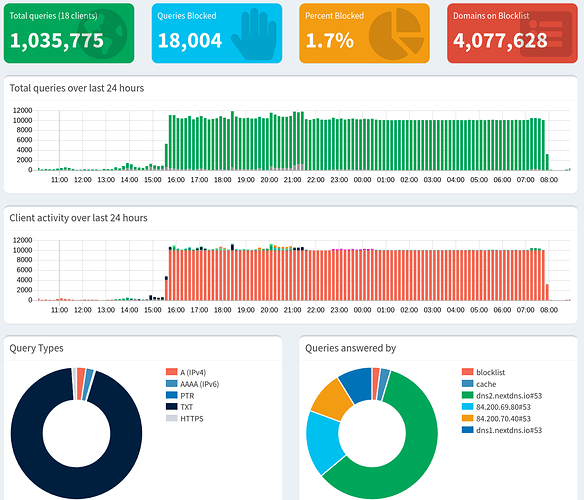 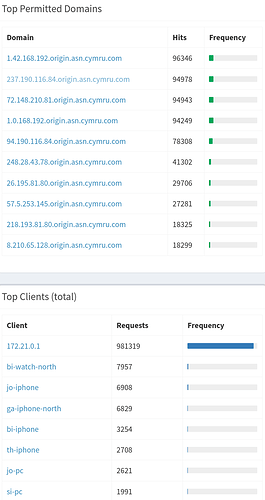 tshark -i br-5dcacaf2848e -f "port 53" now shows a normal behaviour after reverting to v5.7 and rebooting my OpenSUSE:

Recreating the container with latest version didn't "fix" my problem

I didn't patch or update anything right before this started

Pi-Hole was started after reboot on May 2nd and everything was/seems fine until today when Pi-Hole stopped working:

Thanks for any advice and help!
Thomas

P.S. While write this it crashed again - even with older version - so it doesn't seem to be related to Pi-Hole-Version…

Pi-hole isn't forwarding anything to that domain.

You are observing a client -presumably 172.21.0.1- massively requesting resolution of *.origin.asn.cymru.com domains, which look quite similar to reverse lookups.
And indeed, Team Cymru seems to be offering reverse lookup services.

The queries issued are not limited to private IPs, though, there are public IPs in there as well.

Pi-hole wouldn't use those services, nor would it create those requests.

You'd have to take a closer look at the client issuing those requests.

Are there any "1-GB-limitations" for the FTL-database that I have overlooked?

BTW: forward reverse lookups for private IP ranges is and was turned off before… 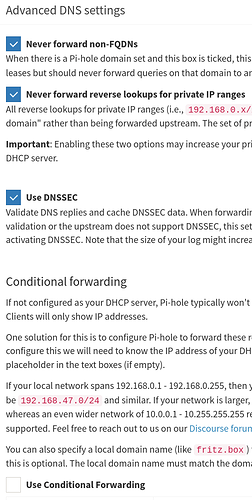 For me it looks like requests are coming from Pi-Hole's IP.

Since you are on Docker, this seems unlikely.
A .1 address is commonly associated with a Docker default gateway, which would mean that any client from outside that specific internal Docker subnet may have sent that request (or the Docker daemon itself, but that seems very unlikely as well).
Your output would suggest that 172.21.0.1 is associated with the Docker internal bridge network you are using. Your Pi-hole may well reside inside that subnet, but it most certainly has a different IP (probably the .2).

From your tshark log, it could be that the source request orginated from your Docker host machine, but that's not entirely sure, as that still could be a redirected request.

BTW: forward reverse lookups for private IP ranges is and was turned off before…

That setting has no bearing on those requests.

If you cannot identify the device (or devices) behind 172.21.0.1 straight away, have a closer look at the associated queries. Sometimes, the domains they request may hint at a specific device (e.g. an Amazon Echo could show a preference for Amazon domains).

EDIT:
A common cause for huge volume queries would be a DNS loop.
Or, if you were to host your Pi-hole in a cloud setup, it could be you unintentionally run an open resolver that has been publically discovered only recently.

I think that my FTL-DB got corrupted in some way

I have renamed it to check it later in another container or on another linux host… I'll keep you informed if I find the root-cause for this or have anything new that might be of interest.

There might be the possibility that my router (which queries my Pi-Hole for my "DMZ" network clients) "bombed" my Pi-Hole with these many reverse-lookups… I'm not sure at all, but I think that this strange behaviour might just be a consequence of my start-stop-looping Pi-Hole due to some problems with my FTL-DB…

I just noticed mtr -z google.com uses cymru in the background to get the AS numbers.

I can confirm: when using mtr with -z parameter for a "longer" time cymru is used.

See also on GitHub for OpenSUSE and Ubuntu Package.

Thank you for sharing that with us,

Especially since it confirms that Pi-hole was merely bringing those requests to your attention, rather than causing them.

EDIT: Could you elaborate which piece of software was responsible for those requests?

EDIT: Could you elaborate which piece of software was responsible for those requests?

From the man-page of "mtr"…

…I got the link to GitHub and did search for "cymru": Search · cymru · GitHub - so mtr software in combination with "-z" parameter was responsible for those (TXT-)requests.