Went to go check the admin interface on my pihole and this is what it displays, it used to work perfectly, I'm not sure why its randomly started doing this.

I also updated PiHole to see if it would fix it, but it still displays this: 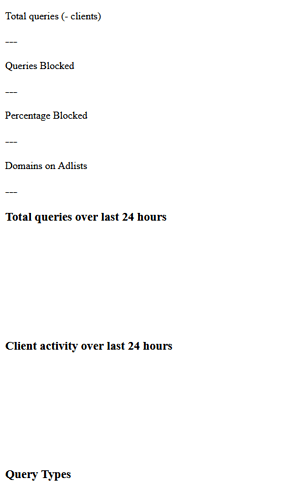 Anyone have any tips on how to fix this? Pihole still actually works, just the admin interface doesn't for some reason.

Please follow our help template. In particular, we need a debug token.

This is what pihole status returns

This is the Token it gave:

I think it showed an issue up with apache at the start of the pihole -d command but it seems for some reason it hasn't saved what it reported in the log file?

Also throws up this

You are running Apache as a webserver, in additon to (or instead of) Pi-hole's lighttpd:

You have to resolve that conflict, either by disabling Apache, or by moving Apache or lighttpd to a different port (edit: e.g. via /etc/lighttpd/external.conf).

Furthermore, your router is not distributing Pi-hole as DNS server, nor its own IP, but rather Cloudflare's:

DHCP clients will by-pass Pi-hole, using one of those public DNS servers instead.
Pi-hole has to be the sole DNS server for your clients.

Also, the large count of YouTube domains (some 16,000) on your personal blacklist would suggest you are using a third-party script in an attempt to block some of YT's advertising.

Such a third-party script may also affect Pi-hole's operation, maybe also its webserver if it would include changes to Pi-hole's UI as well.

In general, trying to block unwanted ads that are delivered via the same domain as content using a scheme of ever-shifting domain names, may prove somewhat futile and counter-effective via a DNS filter like Pi-hole, since may not block all ads, and you may also block wanted content delivered via that same domain.

Thanks for your prompt and detailed response,

I was in the process of setting up my RPi4B as also doing my own cloud storage which wanted Apache I believe, if I move lighttpd to another port, will that effect anything in regards to Pihole operation?

I have my router set up using Cloudfare DNS servers, but the clients on the network set up with static IP addresses but using Pihole as their DNS.

Is there a recommended blacklist that we use here? I just grabbed one on the internet.