Please follow the below template, it will help us to help you!

If you are Experiencing issues with a Pi-hole install that has non-standard elements (e.g you are using nginx instead of lighttpd, or there is some other aspect of your install that is customised) - please use the Community Help category.

Once configured correctly, Pi-hole should carry on resolving without any issues.

Pi-hole stops resolving after some time and only a reboot of the system / manual pihole -g brings it back online. During this aberrant behaviour, the FTL service looks fully operational and does not generate any errors.. just the resolution keeps failing. This is very similar to Pihole intermittently stops resolving until hardware reboot. 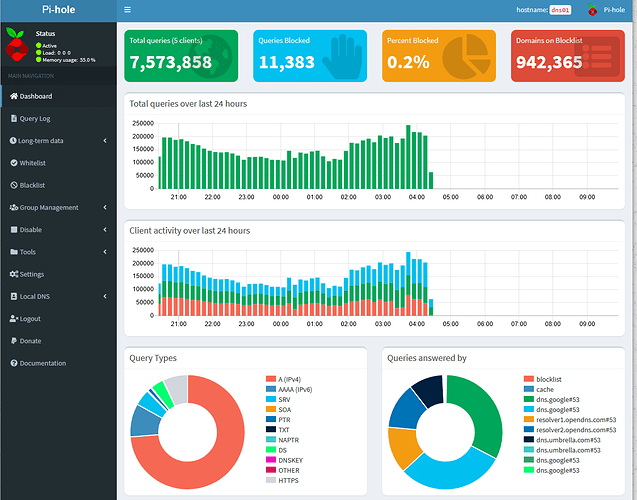 A look at the FTL logs, before and just after the time when queries stop working does not show any errors. Similarly, the dnsmasq log (pihole.log) shows that DNS query forwarding and resolution as working at this stage (all the way till 08:53 ish when no further log updates are seen in the FTL log or the pihole log.)

In an effort to resolve the issue I have so far:

None of those steps helped resolved my issue. Please could you share some thoughts on what may be causing this strange behaviour and what I could try to deliver a permanent fix?

PS: I really like Pi-hole and appreciate all the personal effort your team puts into this.

Two debug tokens, from two installs are included below:

Updated to the latest stable release and currently using these custom settings (as query numbers are huge):

Looks like there is something making a lot of connections to the API and then getting denied:

A quick look at ss -t -a -p confirms that all the connections to port 4711 are genuine / local and not external processes or any other scripts:

Just wondering if the developers would recommend that I compile FTL from source after editing FTL/FTL.h at 198e7c61362e07b22baa8bdb2bb57dd1c53be0fc · pi-hole/FTL · GitHub MAXCONNS value or is that not recommended?

[✓] Your debug token is: https://tricorder.pi-hole.net/v6VaVXXU/
[i] Logs are deleted 48 hours after upload.

Your query count looks way too high for just 5 clients.
Did you check for DNS loops?

The chart from your screenshot would suggest that Pi-hole stopped receiving any queries after a certain time. At that time, your clients just may have started using another DNS server.
It seems your router/DHCP server is not distributing your Pi-hole as DNS, allowing DHCP clients to by-pass Pi-hole. (In addition, it is providing an awful lot of time servers?)

Also, you are running Pi-hole on a public IP.

Any steps you take to allow indiscriminate access to Pi-hole from public networks will turn your Pi-hole into an open resolver, which poses a potential threat for all Internet users, e.g. by serving as a multiplier in a DNS Amplification attack.

The Pi-hole team strongly discourages Pi-hole’s usage as an open resolver , and we won't provide support in that case.

That said, it seems your public IP is currently not allowing access to port 53.

You cannot know for the TIME-WAITs. That looks like some process connected to the API at some time in the past, but never closed the connection.

Are you perhaps using any third-party scripts that would issue Telnet API calls?

Your query count looks way too high for just 5 clients.
Did you check for DNS loops?

Thank you, yes, I did check for DNS loops. No issues on that front - the query count is correct for the network and as expected. 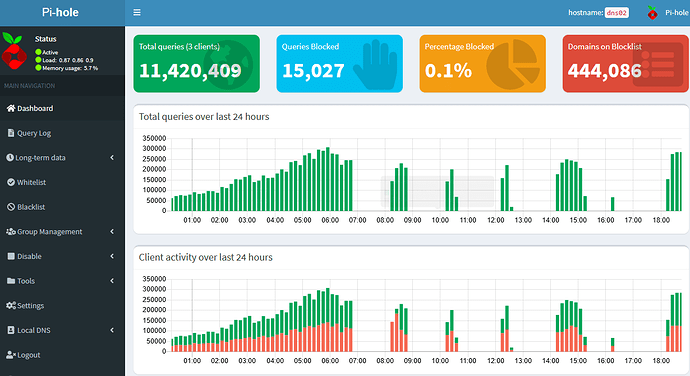 .. and another beautiful graph here:

When I have previously tested pi-hole (all clients addressing it directly), pi-hole failure would cause interruption in the network so for the moment, p-hole is one of the servers to allow some test capability without disrupting things too much.

The chart from your screenshot would suggest that Pi-hole stopped receiving any queries after a certain time. At that time, your clients just may have started using another DNS server.

Spot-on and totally possible, however, I have spent a few hours waiting for that gap to appear and then ran a rate-limited dig (50 parallel queries at a time, shuffled subset of 200-1000 within the TOP1M domains) and basically, all the server returns at that stage is SERVFAIL or no response. An occasional pihole -g makes it happy again..

Originally, I was getting dnsmasq limit errors (expected based on the pre-set thresholds) - which were addressed by a custom dnsmasq sub config (the community thread is quite useful).

I subsequently hit the FTL port 4711 telnet limit of port 4711. We don't have anything on these vanilla installs that would be querying or trying to connect to the API (other than the pi-hole internals). So, I have now tried to edit the FTL.h file within the source:

vi FTL/src/FTL.h
// How many client connection do we accept at once?
#define MAXCONNS 510

Changed MAXCONNS parameter to > 255 and then compiled a fresh build (hash differs from the pre-compiled binary and the system detects it as a dirty build).

I am hoping to replace those old forwarders with beautiful Pi-hole in the long run - and to support the community with donations for patronage.

Your thoughts to help debug / address this will be very welcome.