Network table - seeing clients as hostname of router rather than devices

Problem with Beta 5.0:
When looking at my network table - lots of the device that rely on the router for their wifi get identified as such (i.e. broadband.bt.com rather than say home-pc). this occurs with a few other devices as well that pass through the home router in some way (ethernet). I've tried flushing the network table through the gui and manually clearing the network table via the sudo command but the results are still the same.

Its almost like the system sees its coming from the router as the last hop so identifies the traffic via that hostname rather than delving deeper.

Not a big thing - but would be nice to be able to view the network table to reliably see what addresses are assign to what on my network. 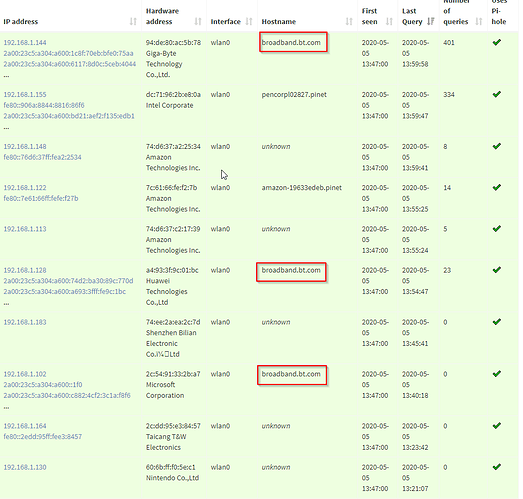 Not a big thing - but would be nice to be able to view the network table to reliably see what addresses are assign to what on my network. 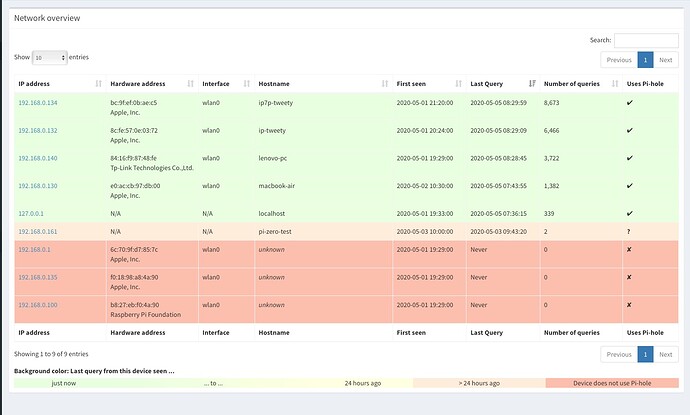 I'll give that a go - but I think this is an issue that was introduced when I bumped up to the v5 beta. Anychance its something that's on the radar to resolve?

What did you see before for the host names for this subset of clients?

The separate hostname of the devices rather than a multitude being seen as broadband.bt.com

I'm pretty sure this is caused by the addition of support for IPv6 addresses on the network table. The network table uses the most recent (= the last used) IP address a client used to make a query to your Pi-hole when determining the host name. This might have been a GUA address such as 2a00:23c5:... for the three devices you pointed out.

I assume you're using conditional forwarding and/or specified your routers as upstream destination and it may be users your ISP's DNS server itself for IPv6 name resolution resulting in broadband.bt.com as reply.

No conditional forwarding setup as I'm using Pi-hole as my DHCP server. I see the dilemma though and I suppose there is no easy answer.

Top of my head ideas:-

I second that. Pihole should be agnostic to the IP version as we don't know which the user prefers.

I think this would be a first step, but what what immediately will follow is "multiple/wrong names on dashboard/stats".
This could be addressed by

even when only valid as an alias for the device's IPs in the Web GUI (the order of /etc/hosts, custom.list, alias has to be discussed).

Even if it sounds strange, it might be on purpose that someone gives the same hostname to two different devices in the same network. I would not implement any automatism but rather give the user the choice (as you suggested).

Ability to chose to enable/disable IPv6 on the network table. Or is the the same as enabling on the DHCP settings page?

I also wouldn't do that. The network overview is meant as a tool to detect devices on the network that doesn't use pihole. If a device uses IPv6 is a valuable information and I see no need to 'hide' it. If users don't want to see IPv6 on the table the can disable IPv6 in their network.

specified your routers as upstream destination

Nope - as my Pi-hole acts as DHCP so I didn't think that would be required?

I was referring to upstream DNS (not DHCP). What did you put here:

but would be nice to be able to view the network table to reliably see what addresses are assign to what on my network.

Note this page was not designed to be a network management tool (and is not intended to be such a tool). It is just a quick overview of the clients on your network to show if they are or are not using Pi-hole for DNS. In your case, they are all using Pi-hole for DNS, and Pi-hole should be showing you the client activity for each of these clients by IP.

You can get a simple table of most of this information using the ip neigh command on the Pi.

Ah - in that case no. I'm using Cloudflare and google. I suppose I could use the router as a secondary IPv4 source

I assume you're using conditional forwarding and/or specified your routers as upstream destination and it may be users your ISP's DNS server itself for IPv6 name resolution resulting in broadband.bt.com as reply.

Strange... no conditional forwarding and not the router as pihole's upstream DNS. But might be related to IPv6 anyway..

Ability to chose to enable/disable IPv6 on the network table.

Well, this sort of exists. Try

into /etc/pihole/pihole-FTL.conf (create if it does not exist) and restarting with pihole restartdns.

Pi-hole will now stop to resolve IPv6 addresses. It may take some minutes (up to an hour) until you see the update on the network table.

Does broadband.bt.com show up in reverse lookups for those IP addresses at all?

Is there a difference to lookups forced through Pi-hole or your router?

There wasn't much going on in here, nonetheless, I will give a quick update. Pi-hole v5.1 will bring the new config option NAMES_FROM_NETDB to address picking up borked IPv6 host names also for IPv4 devices. Furthermore, we're working on supporting multiple host names per device. As this is a more involved change, this is scheduled for v5.2, however.

See the PR for the rationale of the new config flag:

**By submitting this pull request, I confirm the following:** - [X] I have re…ad and understood the [contributors guide](https://github.com/pi-hole/pi-hole/blob/master/CONTRIBUTING.md). - [X] I have checked that [another pull request](https://github.com/pi-hole/FTL/pulls) for this purpose does not exist. - [X] I have considered, and confirmed that this submission will be valuable to others. - [X] I accept that this submission may not be used, and the pull request closed at the will of the maintainer. - [X] I give this submission freely, and claim no ownership to its content. **How familiar are you with the codebase?:** ## 10 --- This adds a new option `NAMES_FROM_NETDB` which allows to disable the try to obtain an addresses host name using the network table. One use case it that there is a IPv6 client without a host names itself. However, using the network table we can find out that this client is the same device where we also kwon an IPv4 address together with a valid host names for. In this case, we use the host name associated to the other address as this is the same device. This behavior can now be disabled using `NAMES_FROM_NETDB=false` This feature has been discussed on Discourse: https://discourse.pi-hole.net/t/incorrect-hostnames/33111

Excellent! will look forwarding to testing