How to edit and build the Docker-PiHole repo? 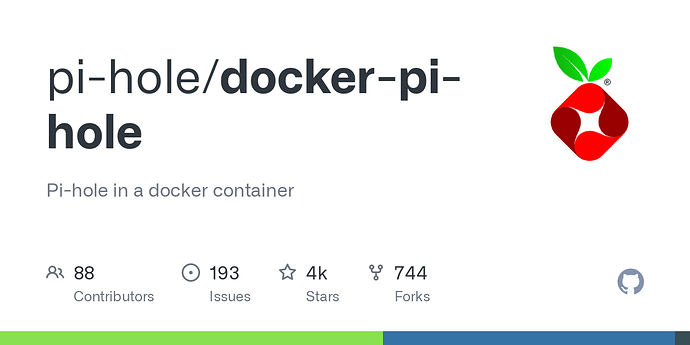 Pi-hole in a docker container. Contribute to pi-hole/docker-pi-hole development by creating an account on GitHub.

What are you looking to achieve, ultimately?

I'm not massively au fait with Docker stuff, but I have done some work on the repo so might be able to point you in the right direction, at least.

The script that it runs is:

Ultimately I would like to be able to edit the github repo with small changes, and have dockerhub automatically build my commit into an image so that I can pull the latest from dockerhub.

Just going by context clues in your first post. Presumably you want to make changes to the admin page?

Correct! I was able to utilize github actions to build out the image automatically from commits and publish them to dockerhub, now the issue is that even when I pointed the install.sh to my own edited basic-install.sh script and edited this line to point to my own forked and edited version of the adminLTE it still does not pull from my fork of adminLTE. Where else would the adminLTE be brought in from?

@BrandonBEE the Docker Pi-hole project is only concerned with installing Pi-hole into docker and makes no changes to Pi-hole itself. If you want to make changes to Pi-hole itself - such as the Admin interface - then you should be looking at GitHub - pi-hole/pi-hole: A black hole for Internet advertisements and not the docker project. If you get changes approved and released into the Pi-hole project, then those will automatically be included in the Docker project as well.