Hello, I have pi hole installed today. I have a script on the run which reports errors. After the installation skript, I get this error after every restart:

Without Pi hole installation, the error does not occur. My OS is Rasbian Buster on a Pi4

Can you tell me where the problem is? 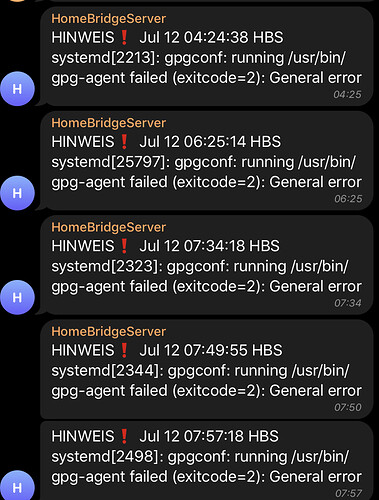 The problem is that GnuPG can't find its config folder (~/.gnupg). To fix this run

The real fix would be for pi-hole to specify --homedir and I'm kinda worried that this hasn't happed yet.

The pihole user should not have a homedir or a login.

Yeah, that's why I was suggesting --homedir.

I'm saying that pihole should NOT have a /home partition, nor should it even have a shell to be able to log in to. There should be no gpg associated with pihole user.

Happy cake day! What would be the best solution going forward with this? I didn't setup any of this but it should ideally work out of the box.

@mibere Can you help me understand how gpg comes in to play?

Have the same message on my system

but ignored it so far.

Just tried this and the error message is gone.

=> gpg-agent needs a configuration/data directory for every available user?

I'm not convinced it's a Pi-hole issue (if it even is an issue at all - I did not notice any negative effects, despite of the FATAL log message).

The more I investigate this, the more it would seem to me that GnuPG is assuming that every user on a system has to be using GnuPG and therefore it should be allowed to access its config options in their respective home dirs, disregarding the fact that some users would never need one.

I don't know whether that's a valid proposition for GnuPG, but I think that classifying the lack of a homedir or permission to access it is wrongly categorised as FATAL by gpgconf.

I've found a bug report at GnuPG that seems to point in the same direction, though that was prompted by actively using a gpgconf command:
https://dev.gnupg.org/T4866

Interestingly, that report has a link to
https://bugs.debian.org/cgi-bin/bugreport.cgi?bug=950836

So this could also be specific to Debian's integration of GnuPG.

Although what you said makes sense, the error did go away after creating ~/.gnupg for pihole (startup) and www-data (6:25 am). The other users on my system don't have that directory (like e.g. the plex user), yet the error is gone. I think the best way to investigate this is to find what's happening at 6:25 am every day. I was looking through crontab/cron.d and systemd timers but couldn't find anything interesting. But I'm sure this is related to www-data/lighttpd, possibly Pi-hole as well.

the error did go away after creating ~/.gnupg

Of course it would, but I disagree that this should be viewed as a correct solution.

Imagine only recently, you'd have plucked quite a few oversized letters sticking out from your mailbox that are neither addressed to you nor do you happen to know the sender.

Fortunately, your new neighbour drops by to pick up his letters.
But seeing they've been bent, buckled and folded, he complains about your mailbox being to small to fit his large letters!

You could either purchase and install a larger box, or tell the postman to stick letters in the right box, or have your neighbour provide his correct address in the future.

I would consider it wrong to buy a larger box, i.e. to create a .gnupg/ folder for a user that does not need one, just to get rid of an error message that should be a warning.
As far as I can tell, that message can be safely ignored, so creating that folder would serve no real purpose, apart from making your log file appear cleaner.

By all means , if creating that extra folder works for you, go ahead with it, but consider that a workaround rather than a solution.

I've had a closer look at the bug reports I posted above.

Betrusting most of the work to GnuPG's gpgconf, that script didn't test for home dirs, while gpgconf was treating inability to access a home dir always as FATAL.

It would seem that Debian as well as GnuPG have done their parts and addressed that problem.

I t could print a warning for a non-existant homedir

And Debian's 90gpg-agent script has been fixed as well:

That said, i agree that the spurious warnings don't seem relevant.
Rather, the environment generator shouldn't try to claim that gpg-agent
should be the active ssh-agent socket if it knows that gpg-agent is
somehow broken.

So i've wrapped the test in question in a "gpgconf --check-programs"
command instead.

Unfortunately, neither fixed version seems to be available for mainline Debian Buster, though at least a backport for gpg-agent exists.

Pulling only the 90gpg-agent script from the backport sources, I did a quick test and couldn't detect any gpgconf: running /usr/bin/gpg-agent failed messages upon restarting my system.
This is just a preliminary and very limited test, though.