Just some curiousity. I've been running pihole w/unbound on a PI3B+ and it works just fine. I decided to upgrade from Buster to Bullseye ( both installed from raspbery pi's installer ) and noticed that Bullseye is using more memory and running hotter. I've seen some posts about the CPU cycle increase but that seems to apply to PI 4s and not the 3B+s. I'm attaching some basic stats. The only difference here is that the Bullesye build doesn't have unbound installed yet but I can't image that would make it run leaner. Other than that they are the same.

Just curious if this is what others have seen. I'm sticking to buster for now but I know that will be unsupported at somepoint.

I did a comparison of /proc/meminfo and seems like bullseye, in part, is doing more caching? Just seems so different. 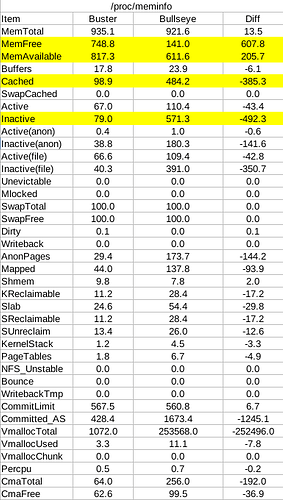 I similarly run Pi-hole and Unbound, plus VNC and some other things, on a Pi 3B+ running the full version of Pi OS Bullseye 64-bit. It's in an official Pi case which has a snap-on lid and is enclosed. Temperature hovers around 48 to 55 degrees C. It's been in approximately this same range as far back as Stretch and has been running Pi-hole continuously for years.

Your temps are way below any throttling thresholds so there is no cause for concern. I would be inclined to save a Pi-hole Teleporter backup, back up any other data needed, then reimage with the latest Pi OS, reinstall Pi-hole and restore your Teleporter backup.

Thanks, I'm not too concerned about the cpu running a little hotter its more of wonder why thing. CPU Freq is the same on both as is the voltage readings. A good chunk of the extra memory was due to Raspi-config not being setup for headless. I realized that when top was showing 3 pi users logged in. Its still using almost twice as much as the buster build but quite a bit less ( 11% vs 26% ).

One thing I did notice. On Buster I was able to turn the video off, primarily to save power. In Bullseye they have made some changes and you can do this in the same manner. Disabling dtoverlay=vc4-kms-v3d in the /boot/config.txt file is the closest thing I could find. It doesn't help with the power savings ( from what I read ) but it does bring the temp down about 2c for me. I did a simple temp measurement and while not completely apples to apples you can see the diff pretty clearly. At least it won't be bugging me now 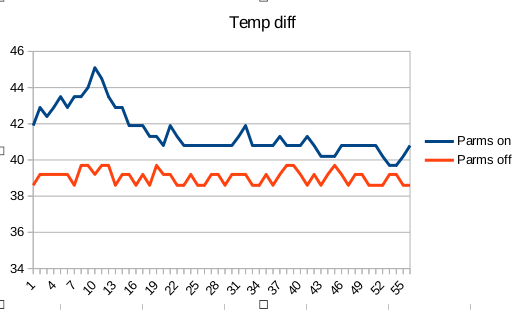 The title of this thread suggests you are comparing Debian Buster against Debian Bullseye, but you actually appear to be comparing the Raspberry Pi OS versions of both.

I use Debian (not Raspberry Pi OS) for PiHole with Unbound and WireGuard and found no difference between the two regards temp or CPU/memory usage.

Interestingly the number of processes you show as running are higher than my Debian setup, top shows 113 tasks. Suggesting unnecessary bloat in the Raspberry Pi OS versions.

That is correct. Since they dropped the whole "raspbian" thing its a bit confusing. I am going to trying the straight debian bullseye build as I'm having some issues with unbound no working correctly on the pi version.