Pi-hole Web Interface: The Next Generation

Originally published at: Pi-hole Web Interface: The Next Generation – Pi-hole

We have been working on a new Web interface for Pi-hole (referenced internally as Next Gen Admin or NGAdmin). The existing interface built off of AdminLTE has served us well, but we have grown beyond the capabilities of an existing template. We're also looking to implement an HTTP API.

This new interface is open source and we welcome your contributions as we have just made the repo public. Read on to learn more or check out a demo of the new interface here.

Why Are We Developing A New Interface?

This new interface shares a lot of the visual appearance with the existing one, but it has a lot more going on underneath the hood. One of the biggest benefits is that it removes the need for PHP on the server.

Contributing To This New Repo

If you are interested in helping develop this new interface, head on over to the GitHub repo. Even if this is your first project, we welcome all contributions.
1 Like
Ondrej January 13, 2018, 7:35pm #2

Hello,
interestingly. Such other will be

Personally, I would keep these round charts in the new interface. 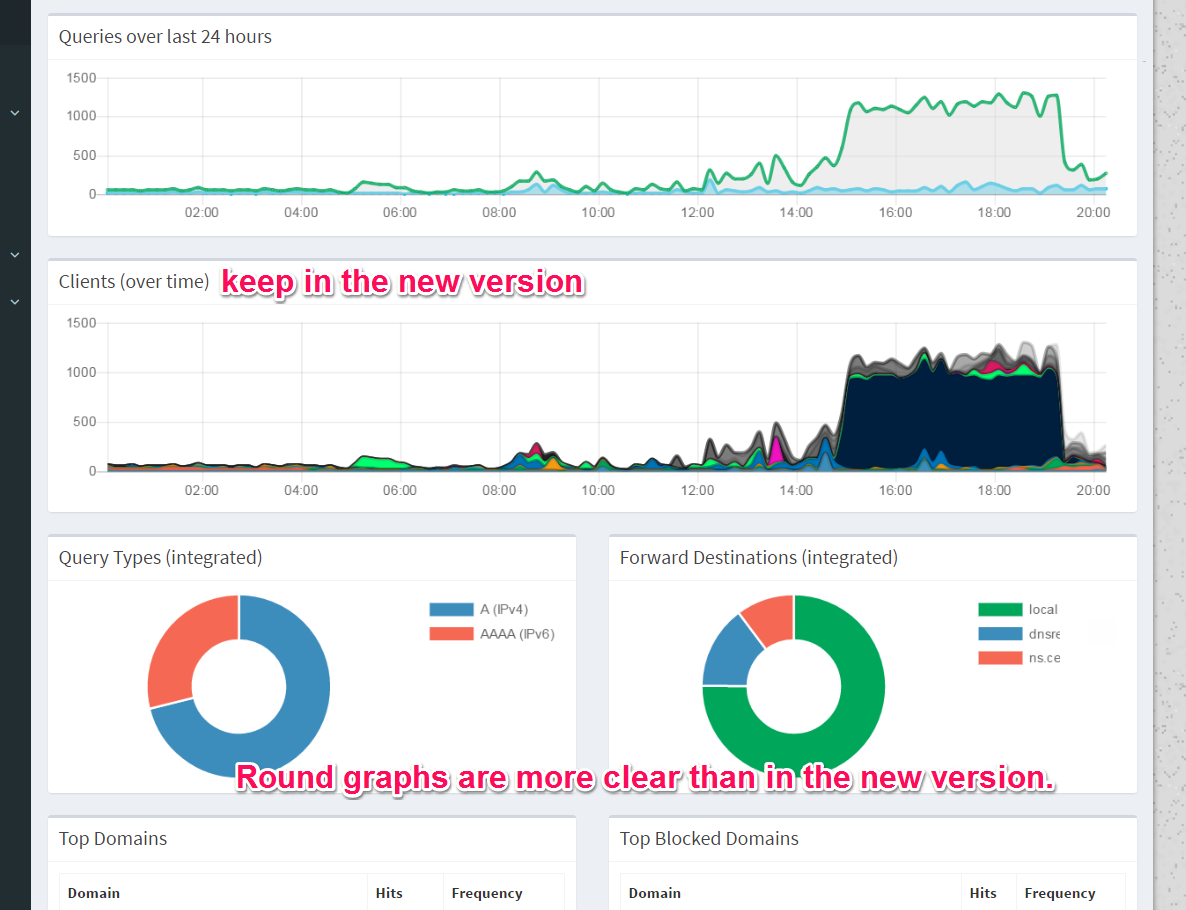 Or the user can choose himself as needed

But it's just my opinion. I'd like it to stay that way.

I definitely agree with the post above me, the pie charts and long graph for clients make it easier to see whats going on rather than the stacked percentage graphs.

It would also be good to keep the name of the DNS server. Because someone has a device more. DNS 1,2,3 ... in network. (may be)

I would also prohibit them from seeing graphs and statistics without logging in. (If it's just for DEMO demo I can understand

If something works, I would leave it so

Yeah and I would still keep information and load, temperature, etc. like the old interface in the lee above.

The currently shown demo is much in the works and has been started already when the dashboard query types/forwards charts have been still over time instead of pie charts, clients over time didn't even exist and as such does not necessarily present the current state of the work. Also we experience a little bottleneck since a few months as all "core developers" are much more busy than they have been before (changing jobs, moving to new places, etc. etc.).

Currently, the mentioned HTTP API is somewhat higher in priority than the NG web interface as it doesn't make too much sense to code on the web interface without having the API ready to hand out the requested data.

One of the major reasons, if not even No. 1 of them, of making it public was the hope to attract people to look at it and contribute. As such we only put up a working demo that is far from completion to also open up the possibility for the community to shape it as they'd like to. The best way to do this, of course, is by submitting pull requests as it will be much easier for us to "just" review changes instead of having to code it ourselves. We have one core developer who is very experienced with React, but the others are still learning it.

Hi. First comment here. Thanks for this awesome software and all the hard work that went into it. It’s a must to run on any network these days.

The reason I’m commenting is because of how passionate I am about this software. In fact, I was thinking of contributing since I’m a professional developer and open-source enthusiast. One only has 24h a day, so I choose carefully haha.

Anyway, please do not get me wrong, but I would love to join the discussion and ask some questions.

I think a fresh start is great. Lessons are learned and the software has evolved. Get rid of legacy. But stick with a beautiful simplistic web gui, based on a powerful api so others can fork or make their own. But based on proven and widely used standards. That is my opinion.

Anyway, just me thinking aloud. Please dont see this as an insult or unhappy “customer”. I love pi-hole! Really do.

I really like this new interface. How can I install it on my existing PiHole setup?

Removing PHP helps remove one of the more troublesome dependencies in terms of support and allows us to create that beautiful and simplistic web interface more easily and quickly. The API will be much nicer and more standard than the current organic one.

The login page is just for looks right now.

Thank you for your answer and time.

I have looked into the workings of pi-hole some more, besides just using it with great appreciation.

If I understand the current working correctly:

So, to eliminate PHP completely, you need to be able to connect the web interface to FTL without the (current) use of PHP's sockets. Currently both the old PHP way and the new FTL way of getting statistics rely on that PHP socket.

Are you guys planning on using a JS websocket to connect the new web GUI to FTL? This would require FTL to have websocket code. A bit more code. But, you could let go of PHP so you win a lot too of course. Yet, you can't just make a browser connect to anything. You can only upgrade a HTTP-request, so this would mean the webserver needs to be able to handle websockets, plus.. for the webserver to then communicate with FTL. This would require lighttpd to get some custom work done to it (for the lighttpd<>FTL part) leaving nginx and apache to be no longer an option, no?

I'd love to hear if I see the big picture of the workings right, and if my conclusions at the end are right. Most likely I'm still missing something. Hopefully one of you can tell me. I'm especially curious about the (I suppose) JS to FTL connection.

Have a great day!

Core Pi-hole is written in Bash: GitHub - pi-hole/pi-hole: A black hole for Internet advertisements
It handles the core routines such as gravity, installing/updating/reconfiguring Pi-hole, managing the lists (white, black, etc), managing access to setupVars for the PHP web interface (this may be moved later though), chronometer, checking the block lists, and some other utilities such as pihole -t.
Core Pi-hole does not have any services of its own (besides dnsmasq and lighttpd).

You got FTL's part right. It provides statistics about the logs generated by Pi-hole Core (dnsmasq). These statistics are used by the web interface and chronometer. Before FTL, PHP would have to parse the dnsmasq log for every query (verrrrrrry expensive and slow).

The PHP web interface has an API file (api.php, which uses api_FTL.php) which connects to FTL over a local socket to get data from it to pass on to whatever was calling the API.

We're developing an HTTP API which will connect to FTL via a Unix socket using the MessagePack protocol to efficiently stream data. Since it runs server-side, it will take the place of the current PHP API, and should be faster too. We considered developing the HTTP library in C inside FTL (and even implemented most of it), but we decided to move that HTTP API functionality to a new program. The reasons for this decision were that we felt that FTL should focus on generating the statistics and implementing a web server in C is not the best idea (especially if we want to easily add advanced features, and other languages are better for that).
You can see the work done in FTL to support this here: https://github.com/pi-hole/FTL/pull/75

We haven't decided when to fully announce the new API, but we hope it will be soon.

Thank you for getting into details. I'm learning and understanding more now.

The new component (lets call it Web-API) will use a socket to talk to FTL on the same machine. It uses MessagePack inbetween the two. Cool.

Anyway, agreed in this case that PHP is rather large for the simple job it has in pi-hole. But I see more oppertunities to make it lighter and faster even after PHP is gone.

You said you don't want to create a webserver in C so you can profit from mainstream techniques later on. To me, if the situation above is right, I would be thinking; let's integrate a small simple webserver into the new Web-API. Just serving the few pages the Web-GUI offers, the Web-GUI right now doesn't require any fancy stuff as of now. This way you can get rid of any 3rd party webserver overhead too. Plus, the only thing that should be interesting to have is the powerful and relatively new websocket-tech. Instead of AJAX polling, you can very easily push new stats from the Web-API to the Web-GUI. And the other way around, a few post events from the Web-GUI back to the Web-API. Then the Web-API can fire off core bash commands or talk messagepacked-sockety stuff with FTL and thats it.

What are your thoughts on that?

PS: in the future, SSL would be nice. But since certs in a closed off network are a thorn in developers' eyes for years now (self signing, devices nagging about it), I don't see that getting solved anytime soon.

The web interface will communicate with the API via HTTP requests (the API will be exposed on 0.0.0.0:some_port). We're looking into a few configurations, including serving the web interface through the API like you were thinking

(therefore putting it on port 80). That would allow us to not require even Lighttpd, and users can do a reverse proxy to put it in other configurations.

SSL is something that would be helpful for users, and we even have a FAQ now for the current version of Pi-hole if you want to manually add in that functionality:

How can I enable HTTPS (SSL/TLS) for my Pi-hole Web Interface? Many users run their Pi-hole on Virtual Private Servers and such, meaning that they would need to access the Web Interface via insecure HTTP. Now, you are able to configure Pi-hole so you can securely access your Web Interface, and not cause issues with blocked HTTPS content. What has changed to allow this? With the release of v3.2, we have made changes to our default lighttpd config to not automatically enable the SSL engine if /…

Does the new UI have ajax support for the Query Log page? I don't know react well enough to understand this, yet: https://github.com/pi-hole/web/blob/master/src/components/QueryLog.js

I'm hoping to have a page that just shows me the blocked urls in close to real-time via ajax, so I don't have to refresh manually.

That might be something that an API could expose for you. We're in the concept stages of looking at ways to get that information to users and it would provide data in a structured format when queried.

If you want to have real-time updates, we should implement that using web sockets. We could use server-side events, but that's not implemented in IE or Edge whereas web sockets are. Ajax would just mean we have to keep a long or short-poll connection to the server, which is not as nice or clean as the first two solutions.

Could you possibly add a few lines to the readme with a developer quickstart guide? This seems like a great project to get familiar with React, but I am a bit out of the loop on the details with the node toolchain. A few quick points on how to build a dev environment would be great.

Add a developer getting started section to the readme

[Requested on Discourse](https://discourse.pi-hole.net/t/pi-hole-web-interface-t…he-next-generation/6535/18?u=mcat12) and something I've been meaning to do.

Can we have the device MAC (and IP) addresses use ANY monospaced font? It will help readibility on the page.