I'm very happy with Pi-Hole. However I'm surprised to have something like 80% or 90% of queries blocked because of one domain, device-metrics-us.amazon.com. It currently has 17,600 hits and the next one on the list is only 172 hits. I have a couple of Echos in my house and an Amazon Fire Tablet. Everything is working fine so I see no need to whitelist the domain. However, given the magnitude of requests, I'd like to ask: do you know what this domain is and why it's requested so much?

experienced similar activity with only one Echo Dot.

Hi, bought an Echo Dot for testing if it's useful for me and for doing a review with PiHole. Here is my quick review for the last 24h: queries/24h: ~1300! (even if it's "sleeping" or micro is turned off) There is no change in traffic/queries if Alexa gets voice input, which is really strange. Maybe some important queries are not routed through PiHole, is this possible? most queries/24h: device-metrics-us.amazon.com ~410 kindle-time.amazon.com ~300 spectrum.s3.amazonaws.com ~300 ntp-g7g…

Don‘t really know why Amazon needs this tons of requests.

Frank, you're lucky it was only 1300 requests in a 24 hour period-- I'm beyond ten times that at nearly 18000! Err, works out to a request every 5 seconds. This thing really wants to 'phone home' pretty badly!

Maybe you can reduce your Alexa devices (just for testing) to only one, and then compare to my stats.
At the moment I get ~160 queries/24h with this domain.

Frank, that was a good idea. I shut off my Kindle Fire tablet and the number of requests to this domain dropped sharply. However, I suppose who cares-- I don't seem to have any loss of functionality. 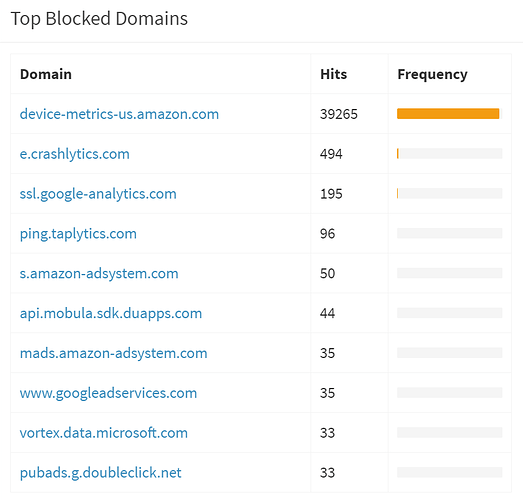 If I shut off the tablets, they queries stop.

I bought a Kindle Fire Tablet basically because they were so inexpensive, however we hardly ever use it. So, it seems the device's only purpose is to keep my Pi-Hole on it's toes!

I think that these amount only results because of blocking some other amazon stuff. Got similar behaviour with Microsoft & Samsung queries.

To investigate this, you can deactivate Pi-hole for some time via admin panel and check if the amount of queries from Amazon reduces. I believe it will do...

The easier test is turning off my kids tablets and I no longer get that many requests in a day. * I only have 2 tablets *

I have done that. I've also checked pi-hole when my kids take them out of the house and the number is greatly reduced for the exact time they are off network.

I'd like to find which app on the tablets are making the requests.

Did device-metrics-us.amazon.com only recently get added to the pi-Hole blacklist?

My KF7 suddenly starting seeing overnight battery drain to 20-30% from 100%. My Googling turned up this:

which then led me here. It seems that the Kindle Fire not only needs to phone home often, but starts burning battery if it can't! Really poor design.

I'm just trying to figure out if this was because of a newly-blocked device-metrics-us.amazon.com, or if it was an upgrade to the Fire's OS. I suspect the former.

BTW @showipintbri , the app making the requests (according to the battery monitor I've installed) is Amazon Device Metrics. I would like to try disabling it (I only have one Fire tablet), but it wouldn't surprise me if it breaks things. Somebody want to give it a try??

I just turned off collect data usage in the app/games menu on the adult account in the kindle fire.

We will see if this reduces the count of these messages.

EDIT: Nope, doesn't make any difference. Turning off the device is the only way to stop it. Annoying as it really skews the stats.

I can't disable the Amazon Device Metrics app on the Kindle Fire, it just restarts anyway.

So instead I've whitelisted device-metrics-us.amazon.com and then added an /etc/hosts entry for it to point to another machine on my local net that is running an SSL server on port 443. It doesn't seem to be processing any requests (no doubt because it has a bogus certificate), but I'm curious whether this will satisfy my KF enough to make it through the night without a 40% battery level drop. I.e., will the app be satisfied that it is resolving the name, but can't actually connect?

This is really awful behavior of the app anyway -- it means that if your KF is in a marginal or non-existent Wifi zone overnight, its battery will drain quickly, while it's "off", for no apparent reason. Nice design, Amazon!

It's good to see my suggestion started off some research on Kindle Fires and the device-metrics-us.amazon.com domain. I find it irritating that the devices behave in this fashion. However, I can't help but ask, does anyone know why this domain is on the block list? What are the Kindle Fires doing with it? Or, said differently, does the domain really belong on the block lists?

There is no one blocklist - several standard blocklists are installed with pi-hole. They do a good job without problems. But you can add or delete lists as you want or need. It is very easy now to turn on/off installed blacklists or to add new blacklists in the admin menu.

Also you can examine which installed and activated blocklist includes this amazon url...

Frank, yes I understand that there are several standard blocklists. device-metrics-us.amazon.com is found in list.0.raw.githubusercontent.com. However, I ask the same question. Does anyone know why this domain is included? The Kindle Fire tablets hit it like crazy when blocked, and it would be good to know what prompted the domain being on this blocklist in the first place.

More from my testing: Sending requests (via /etc/hosts) to a local server seems to slightly extend battery life -- but it still drops from 100% to 80% in a half-day of being unplugged; far worse than before.

I'm trying the control side of the experiment now, and have whitelisted device-metrics-us.amazon.com completely to ensure that I'm seeing the old battery life.

The terrible thing about this design is that if your kindle lives in a place with poor or no wifi reception, then your battery life is going to suffer as it can't find the device-metrics host. And what, exactly, is it doing contacting this host every 4-5 seconds?

It's been few days since I last responded but I wanted to add: I am seeing the same thing!

My kids (2) have Kindle Fire Tablets. I'm seeing both collectively hitting over 50,000 DNS requests per day.

I too noticed my kids tablets battery life draining completely in a day, even when sitting idle and not being used.

What I tried was turning off wifi on the kids tablets. This seems to extend the battery life (like it originally was), not because it's not using wifi but because its not generating over 25,000 DNS requests and web-requests.

Another thing I found was dis-associating from the wifi also extends the battery life, again, this is because it has no way to make the DNS requests. But when wifi is on and you are connected to a network, it will constantly try to connect draining battery.

The next experiment is white-listing the domain and seeing my device battery metrics after.

This is now my top blocked domain as well. I'm going to dive into this a little later to see if it's my Echo that's causing the issue, or if any other devices are hitting it frequently.

can you tell me if you have deactivated pi-hole for a longer time to see if the amount of queries will be reduced to a normal amount?

It is important to know how many and which queries appear on your device, BEFORE anything is blocked in pi-hole.

I think a question that hasn't been answered yet was "why is 'device-metrics-us.amazon.com' being blocked in the first place? Is it how amazon delivers ad's?